skip to main | skip to sidebar

A couple of stories caught my eye last month. Both, as it happens, are about flying machines:
Firstly, on 11th April, Jim Lovell, Commander of NASA's infamous Apollo 13 mission, spoke modestly of his memories on the 40th anniversary of the shuttle's launch, earning a lethargically raised eyebrow from the media. Then, three days later, a secondary eruption of Iceland's largest glacial outlet volcano spewed forth a full-bosomed ash cloud which obstinately parked itself atop North-West Europe. This set off a media explosion which threatened to surpass that of its volcanological (yep, it's a real word) stimulant. As the puffing Eyjafjallajökull (try saying that after a week on an airport departure lounge floor...) contentedly continued its Dave Allen impression, provocative journalists, Iranian clerics, stranded sun-seekers, and - inevitably - opportunistic politicans scoured the ashen landscape for a scapegoat. The shotgun of blame was sawn to the hilt, and accusatory pellets honed in on the buttocks of everyone from insurance companies to airlines, via that nice fellow who makes the coffee at Stansted Airport. To their dismay, however, the seekers found the Scape's reputation as one of the most elusive members of the goat family to be richly deserved. Everyone eventually had to admit that humanity - despite lots of clever inventions like the wheel and the Sodastream and stuff - couldn't really do much to get on top of this particular situation, and would have to sit it out and wait for Mother nature to finish her tantrum.

40 years earlier, as Lovell, portrayed by Tom Hanks in the 1995 film, orbited the moon in the stricken Apollo 13 craft he explains in interview that his mind had strayed to the 1968 Apollo 8 mission, the first to successfully circumnavigate the moon. On the earlier occasion the crew had experienced an overwhelming feeling of calm of which the few lucky enough to have seen the earth from space, without the assistance of Google Earth, often speak. During a live mission broadcast, Lovell read the opening chapters of the book of Genesis. He later explained:


"Humanity's conflicts seemed petty from that perspective, and the need to protect its delicate ecosystem seemed pressing. We were able to read something that was the basis of most of the World's religions, so we were hoping to get the people together."

Of course, by sheer testament to the crew's technical improvisation, and calm collected problem solving from mission control at Houston, the Apollo 13 shuttle was delivered from its seemingly inevitable demise, and Lovell's crew lived to tell the tale, but in the long run, did anyone take any notice of his pan-lunar postulations? 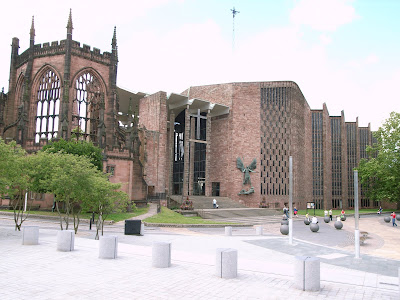 Away from the boyhood fantasy realm of volcanoes and spaceships, I recently visited Coventry Cathedral. Despite growing up nearby, it was my first visit to this remarkable building for many years. In case you were unaware, today's Coventry Cathedral comprises the ruins of a 14th century building, destroyed during a heavy night of German bombing in 1940, and an architectural phoenix completed in 1962. Now, there is a saying in these parts that two forces destroyed Coventry: first the Nazis, and then the town planners. And it is probably not unfair to say that the few precious fragments of mediaeval glory which survived the incendiary bombs only serve to bestow further tragedy upon the horrific concrete renderings which replaced them during the inauspicious postwar architectural epoch. The new Cathedral, however, is the exception to this rule. 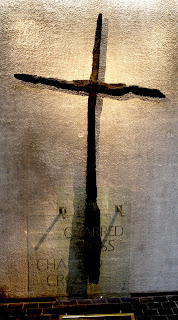 Designed by competition winner Basil Spence (later Knighted for his achievement) the building is a monument to hope, peace and reconciliation. In addition to a host of thought provoking works by prominent contemporary and modern artists including Jacob Epstein and Josefina de Vasconcellos, and the world's largest tapestry which hangs behind the high altar, perhaps most iconic of the cavernous building's hangings is the Charred Cross. Seeming to encapsulate the very essence of today's Cathedral, this piece consists of two blackened beams which firemen discovered in cruciform among the ruins of its predecessor when the blaze had finally been quelled. God in the rubble; hope in the strife.


With such powerful symbols of spiritual unity and humble reconciliation, It would be lovely to say that my visit to Coventry concluded with a cathartic stroll into a golden sunset of hope. I could have left with a renewed faith in mankind to overcome the short-sightedness of forever poking our planet in the belly with a stick like a child taunting a cat, and then moaning when it coughs up a little gas. I might have done so, had I not stopped to look at one final art installation.


Entitled The Evilution Project, the work of sculptor Roy Ray, it consisted of five panels. Each contained assorted items of identifiable rubble, which gradually faded into the same blackness of charred ash. The first showed distinctive personal affects of prisoners of Auschwitz, including human hair, spectacles and the yellow star of David. The next, Dresden, included fragments of broken violins and a street sign in a distinctive German typeface. In the centre was Coventry's depiction, with a fragmented Anderson shelter, ration books and a teddy bear, and to its left Hiroshima, with Japanese writing, melted bottles and a variety of clocks frozen at 8.16am, the moment of the atomic bomb's explosion. On the far left, however, was the must haunting panel; it was entitled 9/11. Here, among the warnings of the past, was the poignant and hopeless reminder that humanity has stubbornly put its eyes to the floor, and marched on unheeding. 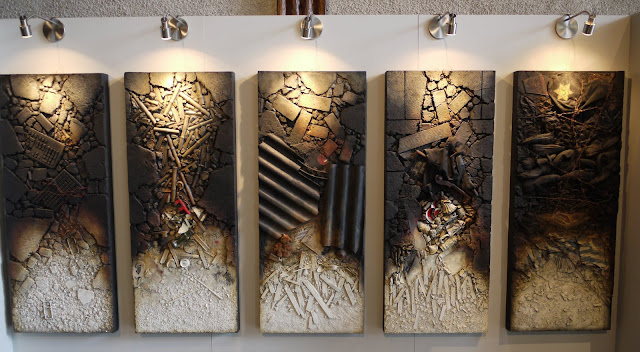 Artist, Ray, writes of 9/11:
"My most vivid memory of that day was hearing the frantic and tearful last calls of the trapped victims on their mobile phones. To symbolise the horror and the sadness of that dreadful event I collected wiring, computer parts and many phones and made a construction. Although in my twenty five years as a practising artist I had not used this method of working, I knew then that this would be the method by which I would deal other examples of Evilution which had concerned me for so long."

At the very least, as the UK votes on its leadership this week, would it not be wise to to reflect somewhat on the bigger picture which Jim Lovell captured symbolically in his aperture of planet Earth? As a race, humanity is quite good at getting on with its thing day-by-day, but with a more holistic outlook, is it possible that the insignificant details such as tax, immigration numbers and ID cards, over which we expend so much emotional energy, seem less significant? Alternatively, amid a continuation of self-interest, intolerance and blindness to empathy in every-day lives, are we just preparing the ground for the next panel on Roy Ray's sculpture? Could they be your artifacts amid the rubble? The scenario does not bear thinking about, but grimly seems all too likely.

Nonetheless, as we await our inevitable fiery demise, it's not all bad news. Flights to Benidorm are back up and running, and Apollo 13 is available very inexpensively on DVD!
Posted by Nick Edmonds at 1:39 am

Nick Edmonds
This statement is false, but everything that follows is true